> Blog > Articles > Hot Sauce: Should You or Should You Not Refrigerate

Should you, or should you not refrigerate your opened hot sauce. That is the modern age-old question in regards to hot sauce.

There are multiple factors to consider when deciding whether to refrigerate your opened container of hot sauce, such as weather (hot or cold), humidity, hot sauce ingredients (the more ingredients it has, the more likely you need to refrigerate it), how often you use it, how hot you want it to remain over the long term, etc.

Before we address those factors, you should know that there are two basic methods of making hot sauce: fermentation and acidification. Fermentation is when you let peppers sit in a liquid for a long time, let them ferment, then process, bottle the mixture. Acidification is when you add an acid, such as vinegar, to peppers and heat it to kill any bad stuff in the sauce that might kill you, like bacteria and the stuff they produce when they multiply (we don’t want to turn this into a biology or biochemistry lesson so we won’t name all these thing here but they do have a name and they are very, very dangerous…like kill-you-dead type of dangerous), then you bottle and seal.

Segen Sauce is of the second formulation. We take peppers, puree them, add in all the other ingredients including vinegar and lemon juice to bring the pH level down to a healthy level then heat the mixture to a high temperature, for a long time (much longer than we are required to because we are naturally overachievers), before bottling and sealing. A lot of the small batch, gourmet hot sauces are made in this way with a slight variation in ingredients and processing times based on the pH levels of the sauces.

Once you open the container, the ingredients begin interacting with the air and all the stuff it contains such as gasses, bacteria, viruses, and a bunch of other things. Your sauce then begins defending itself against any of these that might seek to establish residence in it and potentially make you sick. This is ultimately a losing fight but how long it lasts depends on whether the odds are really stacked against it or if they’re just stacked against it in a more or less normal way.

If you ever took chemistry in high school and you were paying attention, you know that heating something in a liquid excites its molecules and makes it dissolve faster. Same thing applies here. If it’s hot and humid, your sauce will succumb faster. If it’s colder, you’ll enjoy it longer. 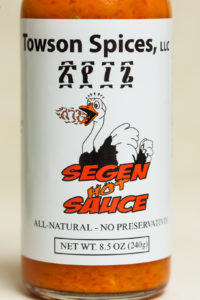 If you have a lot of different ingredients in your sauce, you might find they spoil at a faster rate than peppers and acid and they bring this quality to the sauce and it can only contribute as a negative. Your sauce will spoil faster than it normally would. If their natural pH level is higher than 7.0, it will also affect the final pH of the hot sauce. The higher the pH, the higher the chance of needing refrigeration sooner.

This is also why many manufacturers resort to preservatives. They let your sauce last longer on the battlefield against these fiends.

The last two factors are closely-related so I will address them together. If you go through hot sauce pretty fast, then you don’t really need to worry about refrigeration. If this is you, then you don’t have to worry about it losing some of its heat. From my experimentations, a refrigerated sauce will retain a higher heat intensity than a non-refrigerated sauce even if both sauces are made at the same time and opened at the same time. You don’t have to worry about this if you go through your hot sauce pretty fast, as I said, but if it takes you two months or so, then you could benefit from refrigeration. I have to add that the difference won’t be much but it was noticeable for me.

So, should you or should you not refrigerate? You can decide based on your surroundings and preference. Segen Sauce can remain open and unrefrigerated for almost two years. Refrigeration will make it retain its heat level even though the heat drop-off won’t be noticeable for most people but let us know where you stand on this and what your experience has been refrigerating or not refrigerating your favorite hot sauces.